I started thinking about this weekly blog post a couple of days ago, wondering what I was going to write about. My original plan was to trade off every week between a book review and a writing update, but I decided I didn’t want to keep my focus that narrow (and I haven’t been working on my revision of IN THE SHADOW OF THE NECROPOLIS nearly enough to warrant an entire post about it, anyway).

So, this week, I’m going to be sharing a few of the writing resources that have helped me become a better writer and really hone my craft over the years. I started writing “seriously” in 2011, when I discovered NaNoWriMo. I thought I was ahead of the curve, with my Totally Awesome idea, and armed with the 2010 WRITER’S MARKET 😉 Now, 6.5 years and 10 books on the craft later, not only have I matured as a writer, I’ve discovered what does and doesn’t work for me in terms of writing strategies, and books I refer back to again and again. I’d like to introduce you to 3 books in particular which have been invaluable to me. 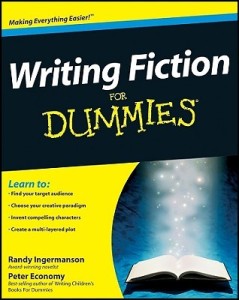 This book was one of the first writing resources I bought. I had never read any of the “for Dummies” series before, but I thought: Why not? I knew almost nothing about the craft, just that I wanted to tell stories like some of my favorites I’d been reading my entire life.

What I discovered in this book was more than I ever could’ve hoped for. Randy introduces something he calls “The Snowflake Method” of writing a book, where you start with an idea, then gradually build on it until you have a detailed synopsis and outline, and fully-realized characters before you even begin to draft. As someone who needs to outline before jumping into a draft, this idea was a revelation. I still use the Snowflake Method 90% of the time when I’m starting a new book, and I refer back to this book often. It’s well-worn and filled with colored flags now. This is definitely the most valuable writing resource I own, and I encourage you to read it if you haven’t, whether you’re just starting out, or have been writing for years now!

On Writing: A Memoir of the Craft

This is more of a personal favorite than a true craft book. Half memoir, half craft book, Stephen King guides you through how he came to be a writer, and what his methods are for sitting down and writing.

I first read Firestarter when I was 12 years old. I’ve grown up reading King and watching the films based on his books. He’s one of my inspirations, especially since he struggled so much when he first started out. Even if you’re not a fan of horror, or King, you should definitely read this book if you’re a writer, if only to say, “If he got through all of this to become a worldwide bestseller, I can get through this rough patch, too.”

This book has been sitting on my shelf for ages; I may need to re-read it now…

No Plot? No Problem! A Low-Stress, High-Velocity Guide to Writing a Novel in 30 Days

I owe this book SO MUCH.

I first discovered it the summer after my senior year of high school (in 2011). I enjoyed writing, and had been vaguely thinking about writing a full-length novel of my own, but didn’t know how to get started, or what to do. I found this book I THINK at Barnes & Noble in the writing section, and impulsively bought it. 30 days? I thought. I can do that. I thought it would take months, or even years. Forget that! (Ha, ha)

I knew nothing about National Novel Writing Month (NaNoWriMo) before buying the book. Through this book, I discovered NaNo and instantly made an account when I found out it was in November. That year, I went to my first NaNoWriMo write-ins, met fantastic writers in my area, and had a great time drafting about 20k of my first (unfinished, genuinely terrible) novel.

And the rest, as they say, is history. 😉 I haven’t participated in NaNoWriMo every year since 2011, but I’ve tried, and even won twice. My NaNoWriMo novels have never gone anywhere, but they’re good practice for my “real” novels I finish in the off months. I truly believe, in writing these “practice novels” during NaNoWriMo, my writing has gotten stronger. Like anything else, writing takes lots and LOTS of practice. No matter how much natural talent you have, the craft of structuring and making sure everything flows and makes sense from beginning to end takes work.

So thanks for inventing this super-neat event dedicated to craft, fun, and discovery, Chris. You’re awesome.

Lately, I’ve been interested in branching out into screenplays. I’ve written novels for over 6 years, and I’m still trying to find an agent for my writing (if I ever finish this revision on the book I’m working on now, I can start querying it!), but I want to try something new, too. At first, I thought I wanted to write for TV, but now I’m not so sure. Being part of a writing team sounds interesting, and working on a show for awhile probably gives you a great understanding of the characters, but it’s also a little limiting and unstable, in a way. You never know how long a show is going to last and where/if you’ll find another writing gig.

So now I’m looking into writing feature-length screenplays (movies). With the Oscars coming up, I’m more and more fascinated and drawn to really good screenplays. It’s a VEEEEERY different format from the novels I’m used to writing, but I love learning new things about writing. So, I bought this book last week, and I’m currently reading it. I’m still in the beginning sections on plotting, characters, and things like that, which I already know (way too much) about. I’m waiting to get to specifics, like how to format screenplays and things like that 😀

Once I’m finished with this revision, I think I’m going to try my hand at a screenplay! I’m thinking of adapting my 30 page story I submitted as my senior thesis in undergrad… 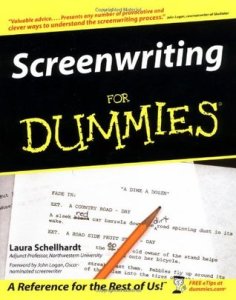